Shopping Basket
Your Basket is Empty
Quantity:
Subtotal
Taxes
Delivery
Total
There was an error with PayPalClick here to try again

Thank you for your business!You should receive an order confirmation from Paypal shortly.Exit Shopping Basket

My mother once told me that, as I grew older, time would pass faster. Of course, I didn’t believe her.

But the other morning, as I sat on Harbour Town’s pier observing pelicans swooping around in circles over a school of fish just beneath the surface, I realized that, once again, Mom was correct.

Can you believe it’s September already? Where has this year gone? It seems like just a few weeks ago that I signed the lease for the studio and began the wonderful (albeit exhausting) task of finding suppliers online. I found magical Zig felt-tipped markers that are such fun, and I’m still learning all the cool things they can do. Pretty colored envelopes, and gold and silver foil lined ones; reams of cardstock (do you know how heavy a ream of cardstock is?); frames made from gorgeous moldings; tapes and glues and glass and mounting board . . . my lists kept growing. When the orders began arriving, I apologized to Meg, the fabulous UPS driver, for causing her such hard work, delivering all of those heavy boxes. I’ve known Meg for over ten years; she was the UPS delivery person for an art gallery/gift store I managed in Harbour Town, and she is the nicest person you’d ever want to meet. She’s a tiny woman, very thin, and I’m always amazed by the ease with which she lifts large boxes. She must have Wheaties for breakfast every morning . . .

As I sat on the pier, I marveled, once again, at the grace of pelicans in the air . . . how they can turn on a dime, or quickly descend to just above the waves, all of them in alignment like a fighter squadron coming in fast and low. 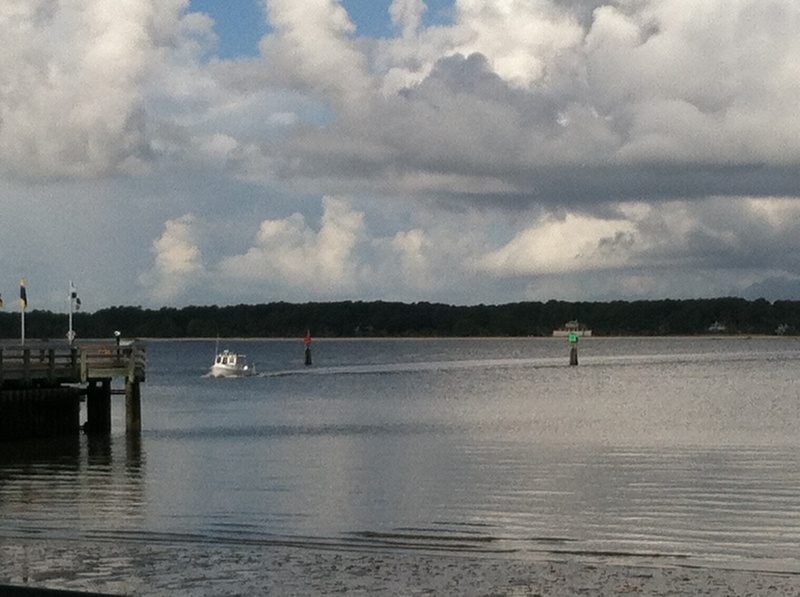 This picture is quite deceiving. It probably brings to mind a crisp fall day; actually, that morning was hot and humid. There’s usually a nice breeze by the water, but occasionally the flag at the end of the pier doesn’t even budge . . . and then the no-see-ums come out from wherever the darn things hide and they attack without mercy. If you don’t know what they are, you’re lucky; they’re tiny gnats that get in your hair, nose, eyes . . . and they bite! I’ll never understand how something so infinitesimal can cause such pain.

We’ve had an unusual amount of rain this summer, and today is quite cloudy and dark, with the probability of rain around 80%. I doubt that I’ll be participating in Market today, since it’s held outdoors and water and paper don’t mix well. But I’ll keep busy in the studio – I’m working on a new website! Even though the website builder is easy to use, basically drag and drop, it still takes me an inordinate amount of time to create a page. But I will carry on! Have a glorious jewel of a day, regardless of the weather where you are . . .

Oops, you forgot something.

The words you entered did not match the given text. Please try again.

Reply Kariatid
9:38 on 10 September, 2014
glorious clouds.....I'm majorly into clouds the last decade or so. I hope your newest venture is your best, of course. I've always been in awe of you and your mighty pen!

Reply golden goose outlet
7:02 on 14 July, 2020
An interesting dialogue is worth comment. I believe that you must write extra on this matter, it may not be a taboo topic but typically persons are not sufficient to talk on such topics. To the next. Cheers
golden goose outlet http://www.goldengoosesonline.com

Reply longchamp
15:25 on 18 July, 2020
There are some attention-grabbing time limits in this article however I don?t know if I see all of them middle to heart. There's some validity however I'll take maintain opinion till I look into it further. Good article , thanks and we want more! Added to FeedBurner as properly
longchamp http://www.long-champ.us.com

Reply cheap jordans
14:07 on 10 August, 2020
A lot of thanks for your own effort on this site. My mom really loves getting into investigation and it's simple to grasp why. My partner and i notice all concerning the compelling way you offer effective guides by means of your web site and therefore recommend participation from some other people on this area plus our own daughter is undoubtedly learning a great deal. Enjoy the rest of the new year. You have been doing a powerful job.
cheap jordans http://www.air-jordanshoes.us.org

Reply supreme t shirt
16:31 on 12 August, 2020
Thank you for all your effort on this site. Kate really loves engaging in investigations and it's easy to see why. My partner and i hear all about the dynamic way you deliver priceless tips and tricks on this website and even cause contribution from other ones about this theme so our favorite daughter is learning a lot. Take pleasure in the remaining portion of the new year. You're conducting a very good job.
supreme t shirt http://www.supremeshirt.us.com

Reply birkin bag
19:29 on 12 August, 2020
I together with my guys were following the great points on your website and so suddenly came up with a terrible suspicion I never thanked you for those techniques. All the people were certainly thrilled to read them and now have pretty much been having fun with those things. Appreciation for being simply accommodating and also for making a choice on varieties of helpful information millions of individuals are really desperate to learn about. Our sincere apologies for not expressing gratitude to earlier.
birkin bag http://www.hermes-handbags.us.com

Reply vans outlet
20:01 on 14 August, 2020
I simply wished to say thanks yet again. I'm not certain what I might have worked on in the absence of the suggestions revealed by you regarding such a industry. Certainly was a scary scenario in my view, nevertheless observing a well-written fashion you resolved the issue made me to jump with fulfillment. Now i'm happier for your support and thus pray you comprehend what a great job you were accomplishing teaching many others all through your web page. I'm certain you have never encountered all of us.
vans outlet http://www.vans-outlet.us.com

Reply yeezy 700
5:41 on 15 August, 2020
Thank you for your own effort on this web page. My niece takes pleasure in making time for research and it's easy to understand why. All of us hear all regarding the powerful method you deliver advantageous tips and hints through your web blog and therefore boost response from other ones on the topic so our own princess is certainly learning a lot of things. Have fun with the rest of the new year. You are doing a good job.
yeezy 700 http://www.yeezy-shoes.us.org

Reply jordan retro
7:47 on 17 August, 2020
I needed to create you the bit of observation to help thank you the moment again with your unique suggestions you have featured on this page. It is certainly pretty open-handed with you to deliver freely what a number of us would have distributed for an e book to earn some dough for their own end, and in particular seeing that you could possibly have done it in case you decided. The advice in addition acted as a fantastic way to recognize that other people have the same eagerness just like my own to know the truth more and more when considering this issue. I believe there are thousands of more enjoyable occasions up front for individuals that check out your site.
jordan retro http://www.retrojordanssale.com

Reply goyard
23:44 on 18 August, 2020
Thank you so much for providing individuals with a very pleasant opportunity to check tips from this website. It really is so good plus stuffed with amusement for me and my office colleagues to search your web site the equivalent of 3 times in a week to see the newest items you have got. And indeed, I am at all times impressed with your excellent tricks you give. Selected 3 tips on this page are honestly the most beneficial we've ever had.
goyard http://www.goyardhandbags.us.org

Reply jordan 12
6:57 on 22 August, 2020
My husband and i felt so happy Peter could deal with his analysis via the precious recommendations he obtained from your very own blog. It's not at all simplistic to simply always be releasing tactics others may have been making money from. So we do understand we've got the blog owner to appreciate for that. The most important explanations you've made, the straightforward web site menu, the friendships you make it easier to engender - it is all terrific, and it's really assisting our son in addition to the family reckon that the article is cool, and that's extraordinarily serious. Thanks for the whole thing!
jordan 12 http://www.jordan12.us.com

Reply supreme clothing
16:44 on 22 August, 2020
My husband and i were so comfortable that Emmanuel could complete his researching from your precious recommendations he made from your own web pages. It's not at all simplistic to simply find yourself giving out thoughts that many others may have been trying to sell. And now we fully grasp we now have the blog owner to thank because of that. The main illustrations you've made, the straightforward site menu, the friendships you help promote - it's got mostly extraordinary, and it is leading our son in addition to our family feel that that theme is amusing, and that is quite vital. Many thanks for all the pieces!
supreme clothing http://www.supremes-clothing.com

Reply goyard handbags
19:22 on 22 August, 2020
I really wanted to type a small remark so as to appreciate you for some of the awesome ideas you are showing at this website. My time-consuming internet look up has finally been compensated with incredibly good information to share with my friends and family. I would say that we site visitors are rather fortunate to exist in a perfect site with very many special people with helpful tips and hints. I feel pretty blessed to have discovered your website and look forward to tons of more cool minutes reading here. Thanks a lot once more for a lot of things.
goyard handbags http://www.goyardhandbag.us

Reply hermes belts for men
18:03 on 24 August, 2020
I not to mention my pals were actually studying the good tips and tricks from your web page and so suddenly came up with an awful suspicion I had not expressed respect to you for them. Most of the women happened to be so warmed to learn all of them and have in effect truly been loving these things. I appreciate you for truly being very considerate and then for opting for this form of excellent subject areas most people are really eager to know about. My personal sincere apologies for not saying thanks to you earlier.
hermes belts for men http://www.hermesbelt.us.org
123...983Next »
/